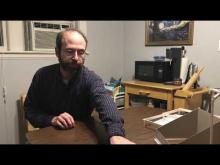 Update: Watch a video demonstration of a scale model of this system and photos of it being built.

In a previous article, I ended by suggesting that raised beds could be made with dimensional lumber (specifically 4' long boards, 1.5" thick) by spacing the posts in a grid 4' apart, although I hadn't yet tried to implement it. I proposed that the uniform bed size would allow a structure such as a chicken tractor, cold frame, or trellis to be moved to any square of bed where it was needed and secured to the boards below.

That approach turns out not to work at all in practice, because in order for a 4' board to attach to two posts 4' apart, it has to go either on one side of the two posts or the other side. If the bed turns corners (as I recommended in the article), one board at the concave corner has to go inside the bed and the other outside. Assuming the posts are 3.5" square (commonly called 4x4s), this means the beds with one board inside will be fully 5" narrower than those with both boards outside (pictured below left). The structures built to to attach to the top of these beds, instead of being square as intended, will have to have one "inside" edge and three "outside," so that they can only fit on the beds facing one direction. 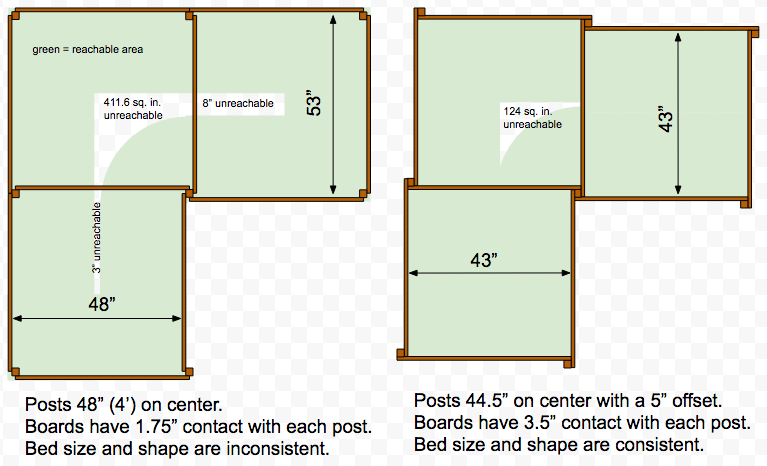 Additionally, although the goal was to make all the beds 48" wide so that all the space would be reachable by a gardener with a 24" reach except for a bit at the corner, in practice the width of the boards on either side means that a 3" wide strip is unreachable even in the narrower beds. The beds with both boards outside are 53" across + the width of two boards = 56" wide, leaving an 8" wide strip unreachable, and at each corner there are 411.6 unreachable square inches (almost 3 square feet).

The solution I'm now proposing (pictured above right) is to attach the boards to each post in a pinwheel arrangement so that each board is "inside" on one end and "outside" on the other. Spacing the posts becomes decidedly more complicated because of the necessary 5" offset, but this could be simplified by not putting the posts in the ground until each bed is built.

The boards now have twice as much overlap with the posts, allowing a more secure connection with less risk of splitting the wood. Unfortunately that means the beds each have only 12.8 square feet of plantable area instead of the ideal 16 square feet, but all of it is reachable except for approximately 124 square inches (less than 1 square foot) at the corner. Because the beds are a consistent size and shape, any structure that is built to fit one of them can be moved to any of them and turned to face any direction.