This was the first year for our sunken-path greenhouse. I was not able to build it at its full 20x12' size due to permitting restrictions, so instead (following the advice of an engineer I consulted) I built just the first 6x12' with the intention of adding on in subsequent years. This means that the east (downhill) wall is temporary and does not yet have a permanent door. Here's an album of photos of the structure during and after construction. I'll make a video next year about what I learned from building it, but for now I'd like to talk about the temperatures I measured during the winter.

Obviously the whole point of a glasshouse is to create a milder microclimate than outdoors. The sunken path is intended to siphon the coldest air away from ground level, and the barrels of rainwater against the garage wall are intended to buffer temperature swings. However, the smaller-than-intended size of the structure and the many air leaks created by my use of corrugated roofing panels — and an old air mattress for a door on the temporary east wall — mean that it is not working as well as I would hope. But how well is it working?

I had only two recording thermometers to work with, so I put one at ground level in the center of the structure and the other on top of the rain barrels for 3 high/low cycles and at the bottom of the trench for another 3 cycles. 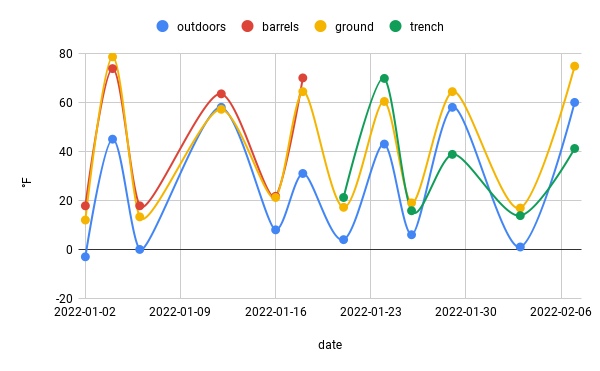 So the ground temperature is consistently warmer than outdoors, but the barrel and trench are not telling a consistent story — neither one is showing the buffering of temperature I would like to see (unless the 1/24 data point is an outlier), and most importantly, the temperatures are not being maintained above freezing (32°F) in any location. It's still possible that I'll get the desired results when the structure is larger and more permanent, but if I don't, it will not have been worth the cost and effort.